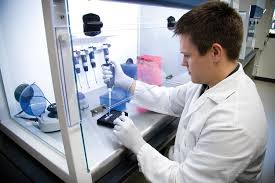 When it comes to what DNA Analysts do, not many people have clear ideas. They just know it must be one of those people wearing lab coats, and peering at different high tech analysis equipment.  They have established a few ideas about what DNA is, from:

a) Police in television shows searching for DNA samples or traces to track criminals down. Those detective series that shows crime labs often show people in lab gowns using high tech equipment to look for traces of DNA to compare with their database of criminals; and

b) Paternity cases written about in newspapers where men have their offspring’s DNA tested to be sure they are indeed the father. This is highlighted in cases of infidelity and establishing a list of heirs to large estates.

What does the DNA Analyst have to do with them?

In tracking down criminals, it is the DNA Analyst who gets provided samples from which DNA traces are drawn.  From the samples (pieces of evidence such as cigarette butts, blood or hair), the analyst is able to determine the identity of the people whose DNA matches those in the samples.  They may be suspects, victims or potential witnesses.  However, it is not for the forensic professional or a DNA analyst to solve the case.  Their role in this is simply to match DNA from evidence samples to people’s identities, by comparing those samples to DNA databases or, in some cases, to the samples drawn from suspects.

When the case goes to court, the analyst may be called to testify as an expert witness.  He is asked to provide an expert opinion regarding his findings, as well as, to detail the methods used to come to his conclusion.  He is also typically asked to provide an estimated margin of error, which is very low in cases of correct DNA analysis.  Though procedural mistakes have at times been made, the DNA results are usually very reliable.  Accuracy of DNA evidence is estimated at more than 99.99%.

The most famous court cases involving the use of DNA evidence include the solving of cold cases from back where the technology was not yet available.  DNA evidences have also exonerated innocent people who have been unjustly incarcerated for lack of better technology when they were originally tried.  It is credited with giving closure to families of victims from long ago, and giving justice to those wrongfully convicted – at times at the expense of the government who usually gets sued for damages in the millions.

When a person suddenly makes a claim for a portion of a deceased person’s estate by claiming blood relations (he was my father, mother, etc.), the help of the DNA analyst is sought to resolve the issue.  Samples, taken from the deceased and the claimant, are compared to establish any trace of lineage.  The result of an analyst’s work is considered firm evidence of blood relations or the lack of it.

The DNA analyst is part of the forensics team who uses scientific methods and equipment to aid in the investigation of a crime.  As such, they also perform some mundane tasks such as cleaning, maintaining and calibrating laboratory equipment.  They also counter-check each other’s work to ensure greater accuracy.

How does one become a DNA Analyst?

The educational requirement usually includes at least a bachelor’s degree in biology, biochemistry, forensic sciences, genetics, microbiology or molecular biology. Then, you will need to take additional courses which will allow you complete comprehension of each stage of DNA analysis. You will need to learn the terminology, procedures, techniques and scientific principles used in DNA analysis.  Courses in the field of biology, which involve a substantial amount of laboratory work are particularly helpful in preparing a person for a career in DNA analysis.

A DNA Analyst makes about $41,000 per year, and it leads to even better paying jobs in the field of forensic science.

If you have an interest in the natural sciences, perhaps a career as a DNA Analyst is for you.

Be the first to comment on "What Does A DNA Analyst Do?"