A lot of people are looking forward to their graduation day because this marks the end of their schooling. With this, a lot of people are also looking forward to listening to some of the nicest and most heartwarming graduation speeches ever created. But these days, this is not necessarily the case especially since a lot of school institutions have become open more than ever to allowing people to come with funny graduation speeches that will not only keep listeners entertained but that will also hopefully leave a mark in their hearts forever. If ever you get invited to speak in front of a large crowd, make sure to incorporate some funny lines as well. Lisa Kudrow is one of the most famous television stars of her time, thanks to her decade-long stint at the infamous series entitled Friends. She is known for her witty attitude and on her graduation day in 2010, this is exactly what she expressed when she was given the chance to speak in front of the crowd. In the said speech, Kudrow even incorporated some of the most famous lines from the said sitcom, which garnered her endless applause from everyone. There is no denying the fact that Ellen Degeneres is perhaps one of the smartest and most whimsical personalities in television today. This is why it cannot be denied that the speech she gave on her graduation in 2009 from Tulane University contained the same wit and humor that everyone was expecting from her. But more than the humor she expressed in her speech, she also spoke of inspirational words and reminded everyone to pursue their passion no matter what. Stephen Colbert was invited to speak in front of graduates from the Northwestern University in 2011. Here he reminisced about the life he spent in the four corner walls of the school and even incorporated some humor by touching on how much the university has changed from the last time he was there. A lot of the people listening to his speech laughed so hard but more than this, their hearts were touched while listening to someone so successful who was also once a product of that same school. Amy Poehler was invited to speak in front of the graduates of Harvard University in 2011 where she combined her smarts and humor while talking to the crowd. She expressed some wonderful ideas and memories she’s had at Boston University where she graduated and even joked that Boston University is the Harvard University of the city. But more than this, Poehler was very much insistent that the graduates find people who will continue to inspire them because according to her this is very crucial to one’s success.

Conan O’Brien was invited to speak in front of the graduates of Dartmouth College in 2011. Of course, the minute people saw him walk up the stage they were already expecting the unexpected. True enough, this is exactly what they got. But more than this, they were also provided with some valuable life lessons about insecurities and making it big in life. He also made mention through some of his stories how things usually fall into place in the end even if you think at first that the universe is working its way against your wishes. 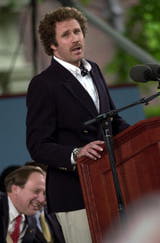 When Will Ferrell walked on the stage, the crowd at Harvard went crazy for they already knew what to expect. However, they were absolutely wrong. Most of the graduates expected a full comedy stint by the infamous comedienne but what they received are a few comical hints but more lessons in life that are truly valuable. One of the highlights of his speech includes his impersonation of George W. Bush of course as well as other funny antics he is well-known for. Seth McFarlane is the voice behind the long time running hit sitcom Family Guy. So as weird as it might have been, Seth McFarlane impersonated some of the most famous characters in the said series and spoke as if they were the ones reading the speech he prepared. Of course, the entire time everyone included in that graduating batch at Harvard went all crazy about the comedienne’s antics but definitely picked up on a lot of the lessons he also shared with them. Ali G is a famous British comedian who is known for his funny accent. This speech became one of the most controversial and most funny speeches ever expressed in Harvard because it spoke of drugs, sex, race and every other thing that existed in the world but a lot of people were too afraid to really talk about openly.

Jane Lynch is one of the most controversial characters in the famous television series entitled Glee. When she went in front of the graduating class of Smith College last year, she spoke of a lot of important matters but incorporated a number of witty punch lines. She specifically spoke about the health care rights of women as well as many other things. As an inspirational character in the television series Glee, it is more likely that she was also able to inspire a lot of people at that graduation exercise. President Barack Obama was also gifted with the chance to speak in front of the graduates of Barnard College last year. Without trying too hard, Obama was able to incorporate a number of funny lines into his speech and was able to also inspire a lot of the students who were listening to what he had to say. Some of his most important advices included reaching high for one’s dreams and hoping deeply for everything that’s best in the world.