If you have a passion for competitive sports and have outstanding verbal interaction skills, then you might want to be a sports commentator. Sport commentators work during sporting events either for TV or radio broadcast. They present in detail the ongoing action, as well as, give their own opinions on the sport.

To become a sports commentator, you must possess an extremely good reporting skill. You should have a good grasp of the sports, as well as, some knowledge in journalism.

A sports commentator’s career can be very rewarding if they are passionate about it. They also experience superstar status among sports enthusiasts.

College would be a great place to start practicing. A large number of colleges have their own student radio which in turn is an excellent chance to acquire a bit of live newscast experience. You can also choose to work on your university newspaper. Receiving internship experience within broadcast media while in college will be very valuable once you start looking for employment outside college.

An aspiring sports commentator will need to be the number 1 fan of the sports as well. They must  know a lot of things about sports teams, the players and the statistics of the sport that they are playing.

Usually sports commentators are employed first as sports reporters wherein they publish and research a wide range of sports topics for media firms. They may also work in the background involving a broadcast like a sports program or news. 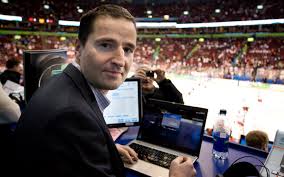 Sports commentators have modest beginnings. It is the same like starting out as a professional baseball player. You will have to start out with a small audience, earn a rather low salary and work your way to get promoted.

College graduates that aspiring to be a reporter or sports anchor in a TV station will face fierce competition. A job opening typically attracts 100 to 200 applicants and will go through a rigorous process before employment.

Starting salary for rookie sports commentators can be as low as $15,000. Even though the starting salary is low, the salary eventually gets better as you become a more seasoned sport commentator. According to data from the Radio-Television News Directors Association and Foundation, a typical sports reporter can make up to $33,000 yearly while sports anchors can have an average annual salary of $51,000.

Sports commentators are found in the media industry in these jobs:

Being a celebrity in the major league sports can be quite rewarding for both athletes and sports commentators. One example of such star is John Madden. He used to be a coach in the NFL and is known for numerous Super Bowl championships. He made it big in the industry when he worked as a sports commentator for 20 years in the game of American football.

He landed a 4 year contract with a $30 million dollar deal back in 1993 to work for FOX networks. Forbes.com reports his annual income is around $18 million dollars back in 2005.

One more example of a highly paid sports commentator is Brent Musberger. CBS gave him a deal for $2 million dollars to work for them and cover the role of chief editor for NFL Today.

So if you are passionate about sports and is like a walking Wikipedia on anything about sports, then you might like to become a sports commentator today. The work is very rewarding even if it’s competitive.

Be the first to comment on "The Exciting Life Of A Sports Commentator: Guide On How To Become One"